Everyone has them, while many are the same there are also many very different traditions. My family has always had two that I really love and in the recent years my Grandmother has opted to do these two traditions in place of them and Christmas dinner.

The first is very simple, about two weeks before Christmas most of the family, (adults mostly) go out to a nice restaurant. It is always the same, why? because Grandma picks, and no one changes what Grandma wants. NO ONE. Anyway, it is a nice waterfront seafood and steak restaurant that has been there for many many years.

Second tradition is my most favorite! Though if it was an option I personally don't think that anything could really compare to the formal Christmas dinner we used to have but with Grandma's age and her not wanting help, she has decided to keep Christmas eve dinner and not Christmas. Another reason Grandma has kept Christmas eve dinner if because she is a seafood junky, (as said above.. same restaurant every year for the other dinner). So.. anyway.. we have a dish that we have always called Avery Island Shrimp. Now after her refusal to share the side dish recipe I went looking for it and, not to my surprise, I could not find it anywhere. The Avery Island Shrimp that we have is not the same as you find on the internet, Why? Who knows!

Let me explain what this dish is. It is regular size shrimp coated in an egg wash and crackers, it is then fried in butter. Pure BUTTER!! The side dish is rice with an onion sauce over it, I personally don't eat this part because I don't like onion. So the only part of this recipe, as you can see above, that I know is the shrimp part. SO here it is a little more in depth.

Instructions:
Because we cook so much shrimp we set our oven to the lowest setting and place cooked shrimp in a casserole dish to keep warm.

If I am ever able to get the rest of this dishes recipe I will surely share it but until then, Happy Cooking!!

And MERRY CHRISTMAS
Posted by Unknown at 8:00 PM No comments:

So.. Most of this post has nothing to do with crafting in any way at all! BUT.. it is something that I want to talk about, mostly because I want to take part in it!

This, with the title in mind, is live action, real life adventure, spy games. What? Yeah.. today I watched a re-run of one of my favorite t.v. shows, Castle, and it was an episode where a fake spy was killed. This reminded me that last time I saw the episode I wanted to look into this and maybe even do it but like a lot of things I plan on doing it got lost in the endless to do list I have in my head!

So today, as I sat and did nothing, I looked it up and there are many... many companies out there that are doing this live action, real live adventure, spy game thing... but none that are like what was on the show.

Now here comes the crafty part, after a little more explanation of course... All of the spy games I have found are ones that groups of people can sign up for as team building exercises or a company and family fun day.

Crafty part!!: Now instead of paying $100 or more to join one of these you can make a spy game yourself. If you are looking for something to do for a party or just for fun with some friends, mostly adults, you can do a little brain storming and spend maybe $30 to make one yourself!!

Maybe I will make one and post it on here some day.. but tonight isn't the night.

Posted by Unknown at 6:10 PM No comments:

I, like many people, am a Pinterest addict and a few days ago I was looking for some cute and easy crochet projects and I cam across a very cute boot cuff and finger-less glove pattern. This pattern is free and is by Crochet Dream, and the Finger-less glove/boot cuff post can be found HERE.

I really like this and it is a very easy pattern to do! And I like easy when it comes to crocheting, mainly because any examples or visual (video) instruction on how to do a stitch is not left handed friendly. So patterns like these are very nice when it comes to me crocheting and it is easy to throw in your own little alteration here and there if you want a slightly different look to it. As you will see from my pictures and then going to the originals page they do look different.

The pattern starts off with a simple band that you sc together, and at the end of that sc line you continue around the edge to form the bottom portion of the boot cuff. Simple and easy to add your own touches! 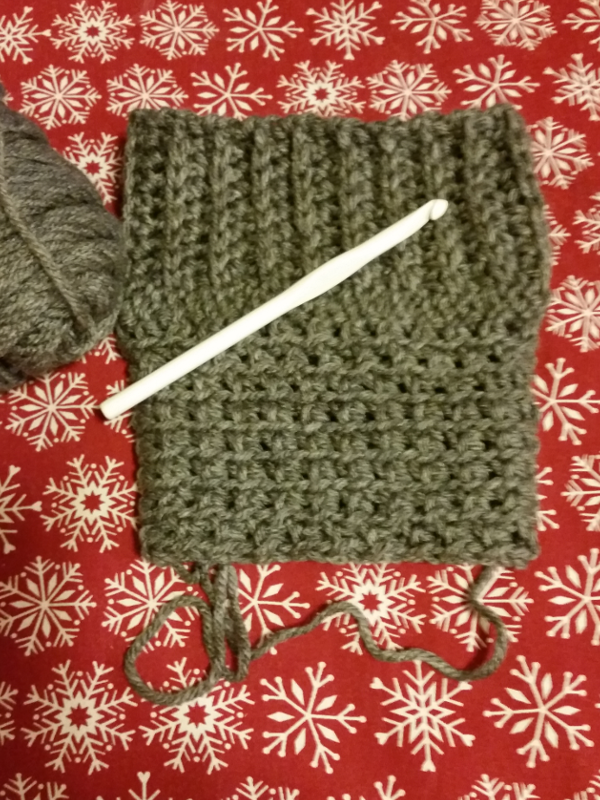 One thing I did that isn't on the pattern is weave in some this elastic string on the inside. For me this is a little assurance that the boot cuff will stay in place when wearing it. This is a person preference but also suggested!

So Happy Crocheting!
Posted by Unknown at 4:00 PM No comments:

Later this week I am having my very first Ugly Christmas Sweater party. This has become a very popular 'trend' as of the past few years so I figured, why not throw my own party. I, being a person of lists, started with food, then games, then prizes, but this post will focus on a game my boyfriend actually came up with.

Now of course, even though it was his idea, I , the crafty one, had to make the game. We looked around for a little while for a Pin the nose on the snowman game at some stores and were met with an average price tag of about $20.00!! With is being the slow season of the year were you have to make your dollar stretch as far as you can I decided to make my own. Now of course I made the decision to make a blog after this project was already done! So I have no "in the making" photos.

This finish product cost me a total of $6.00 (including tax). 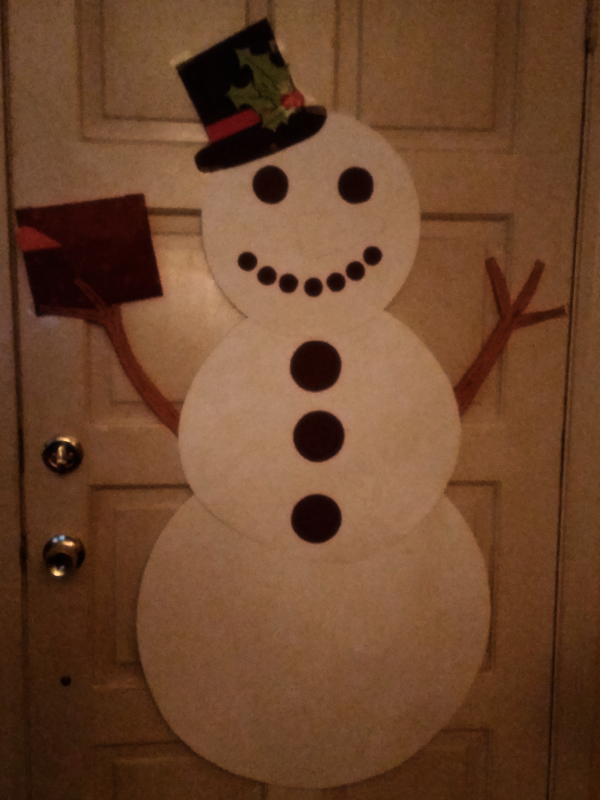 Of course as a slightly savvy shopper I purchased all I would need from the dollar store. So here is a list of what you will need for this pin the nose on the snowman.

What to do:
Tada.. Pin the nose on the snowman. I will be using the homemade version of double sided tape for the "pin the nose" part of this game. *Homemade double sided tape: Take a inch to two inch piece of tape, make a loop sticky side out and connect.*

Now go out and have some Holiday fun and give out some prizes!!

Posted by Unknown at 7:26 PM No comments: